Equity Crowdfunding: A New World of Fundraising and Impact Investing

By Dylan Yuska, VP of Business Development at Slice Capital

Who invests in startups? Did you think of angel investors and venture capitalists?

Most entrepreneurs consider these the only two options for funding their companies. Despite living in the 21st century, most companies continue to walk hat-in-hand to rich people in order to finance their business. This doesn’t have to be the case.

A law was passed two years ago that added a third option, equity crowdfunding. Long story short, the average American can now invest in startups. Sometimes for as little as $100. This new option now allows backers to get an ownership interest in the company, instead of a product or reward. For companies and impact investors alike, this has tremendous implications.

Part I of this piece will discuss equity crowdfunding’s high-impact potential for investors, while Part II will focus on how entrepreneurs can use it to benefit their businesses.

Impact investing is hitting the cusp of mainstream investing. The reasons for its rise are debatable, but there is no denying its influence. Millennials care about social and environmental returns as much as financial ones.

There’s an issue with most impact investing though: it’s not very impactful.

Public company impact investing does not provide enough of an incentive for real change.

Consider Swell Investing, a leading impact investing platform. They help people invest in publicly-traded companies that are clean, transparent, and sustainable. While the criteria are great, the conduit for investing is not. When one “invests” in a publicly-traded company, they are simply trading shares with another third-party selling them. The company almost never sells those shares directly, which means that money is literally going into someone else’s pocket. That “investment” is not helping fulfill the company’s mission, but instead is incrementally affecting their stock price. Theoretically, this encourages companies to be more impactful by driving up demand for sustainable companies, which drives their share price higher and subsequently makes it cheaper for them to hypothetically raise capital down the line.

Is that truly impactful?

True impact is about supporting the next generation of businesses in direct and meaningful ways. Impactful companies are built from the ground up, not when they are already public behemoths with entrenched interests. Investing in companies at ground zero has the potential to be truly impactful. The investment is directly used by the company to grow. This is especially important considering most impact startups with social or environmental missions don’t have a place in traditional venture or angel investment. For these reasons, equity crowdfunding is the conduit through which impact investing can flourish.

Everyone knows raising from VCs and angels is frustrating and intimidating. As Preethi Kasireddy notes in her article “What I wish I knew about fundraising as a first-time founder”,

Unless you’ve been ordained as the hottest up-and-coming unicorn in Silicon Valley, nothing about fundraising is easy. It’s filled with painful no’s: No’s that take your breath away in how quickly and rudely they’re delivered; no’s that are tied up in pretty little ribbons and disguised as “let’s keep in touch”; no’s that come in the form of deafening silence after a series of promising meetings. Especially in the beginning, each one of those no’s will weigh on you heavier than you ever could have imagined…

You’re going to go from one meeting to the next — back to back to back to back. Some will go exceptionally well, others will be lukewarm and frustrating, and the rest will make you want to doubt your idea, choice of career, and possibly existence on this planet.

This can be all too real for many founders, but this doesn’t have to be the case.

Startups with a strong following and/or a sizable user base are eligible for another type of fundraising, equity crowdfunding. If done correctly, this can be a lucrative way to fund a business and seed future growth.

Companies don’t have to choose between traditional and alternative means. Both old and new school fundraising play off each other and can make for a healthy blended capital stack. The benefits are mutually exclusive and complementary. Equity crowdfunding offers unique benefits that venture and angel investors cannot, namely in the form of public exposure, customer loyalty, and a transparent process. 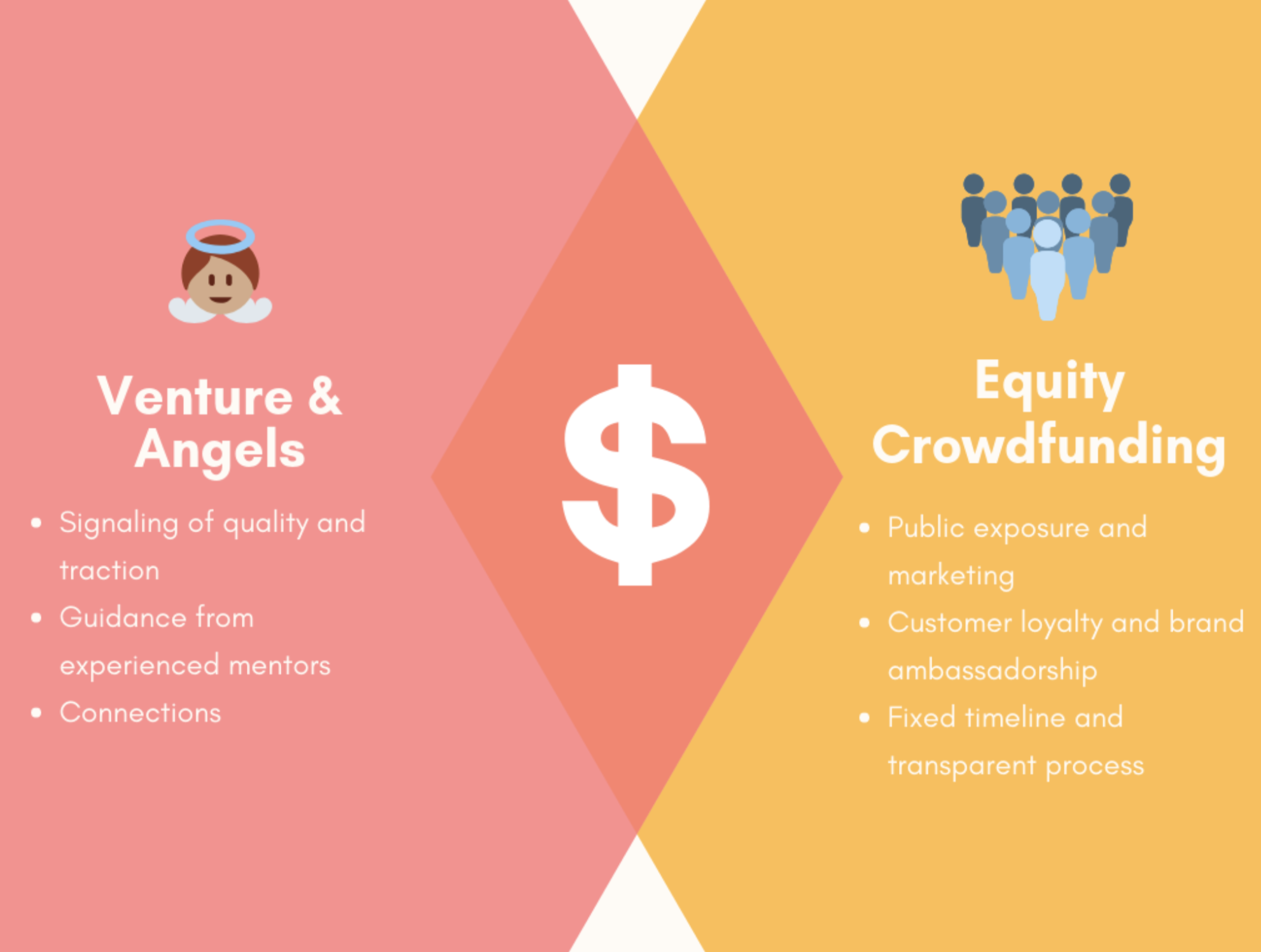 Traditional fundraising through venture and angel investors is difficult and sometimes unfair, but there are benefits. The signaling, experience, and connections they provide are invaluable to an early-stage company. That is why traditional startup funding sources will continue to exist and thrive. Equity crowdfunding is the third way though. A balanced capital stack that includes both traditional and new means will be able to raise more money and reap more benefits than ever before.

Equity crowdfunding requires a company to run a marketing campaign to broadcast their campaign. It combines the benefits of a marketing campaign with those of a fundraising one. Over the course of a campaign, the company is selling its value proposition to the public. This is directed to existing customers, but also includes potential new customers, employees, and partners. A good campaign generates buzz, and a campaign with buzz creates traction. A campaign virally shared on social media or picked up by the press can go viral, which brings in even more eyeballs.

One of the most interesting parts about equity crowdfunding is the new model of ownership it creates. When Instagram was acquired for $1 billion, there were 11 employees and 9 investors. This concentration of financial wealth in the hands of a few is a modern problem created by the ease of scaling a technology startup. On a tour of the now-defunct Packard Automotive Plant in Detroit, the tour guide reflected on the differences between the economies of today vs. yesterday. Looking at the massive structure that once employed 40,000 people, he mentioned it took millions of stakeholders to build a billion-dollar company 50 years ago.

We already know the severity of inequality in this country - it was the focus Bernie Sanders’ entire political platform. Sharing ownership with a small handful of already-rich investors is just exacerbating the problem.

This new model of ownership by hundreds or even thousands is not only morally imperative but also a business asset. As an early-stage company, one of the most important assets is the community that believes in the vision. Startups live and die by their core audience. Even the best companies with the most passionate user bases know how fleeting customers are by nature. If a feature flops tomorrow, will they stick around? What if a competitor undercuts a price?

One would like to hope so, but hoping isn’t knowing. The only way to know core customers will stay loyal is by sharing ownership.

Equity crowdfunding enables an audience to own a small slice of a company. Constituents then have a financial interest in a company’s long-term success. That’s a powerful incentive to stay loyal.

While traditional funding can drag on with uncertain timelines, costs, and commitments, equity crowdfunding is straightforward in all three. Equity crowdfunding takes up to two months to build a campaign and three months to run it. That can be done in half the time with a diligent founder. Each platform varies, but costs are laid out ahead of time with almost all of them coming on the backend of the campaign. Time commitments are needed for complying with due diligence, filing a Form C, and marketing a campaign. Each platform has different timelines for each, but they’ll usually be laid out in advance. Having a fixed timeline with transparent expectations is important. A founder constantly fundraising is a founder not focused on running their business.

What kinds of companies are a fit for equity crowdfunding?

Equity crowdfunding is best for companies that meet certain criteria. Equity crowdfunding platforms are not magic fountains of money that companies can automatically plug into. Like any fundraising effort, it requires a solid foundation and a lot of work. At the end of the day, the vast majority of the money raised in a campaign comes from the messaging done to a company’s own user and social base. Any traffic from the media or money from random investors is just frosting on top. One surefire way to fail at a campaign is relying on random crowd investors to pour money into a campaign. Equity crowdfunding campaigns run on the law of ‘social proof’. People only want to invest when other people have already invested. That law gets stronger the more unfamiliar a person is with a company. A company can break this cycle by focusing on converting their core followers first.

The most important factors of a campaign are the depth and breadth of one’s social reach and user base. For example, if a company’s social following is 60,000 across their newsletter, user base, Instagram, and Facebook, they can set their goals and expectations to the following:

Considering the industry-average investment size of $800 and a 0.5% conversion rate, a company is looking at $240,000 in potential investment. In fact, this is in line with the average equity crowdfunding raise of $227,000.

As one can imagine, a more passionate user base might confer higher conversion rates. One can play with the assumptions but the structure of thinking is the same. How many people can a company reach and how likely are they to invest?

Equity crowdfunding can be a powerful medium for building organic traction, loyal supporters, and cash in the bank. Like anything else, a successful campaign requires hard work and certain prerequisites. Even if a campaign isn’t in a company’s immediate plans, it doesn’t hurt to start cultivating a strong social media presence as soon as possible.

Equity crowdfunding has implications for both investors and companies alike. It’s a conduit for true impact investing and more inclusive wealth creation. On a business level, it is an asset for raising money, buzz, and customer loyalty. In its current form, equity crowdfunding is right for a certain type of company. If it continues to grow, any company might be able to raise one day. The importance of this medium will continue to grow, especially as the SEC considers raising the cap on equity crowdfunding from $1 million to $10 million.